WHAT I'VE BEEN DOING IN THE DARK 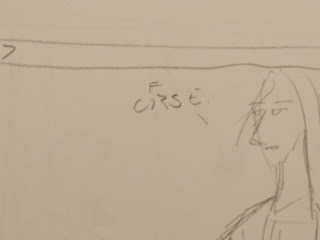 I haven't been publishing anything here for a very long time, and I'd like to explain why that it is.

For a long time after graduating from art school I was trying to figure out my place in the comics world and in creative work in general.

At first, I figured I would just create my own monthly zine both in print and online that would have small, quickly drawn autobio comics and some supplemental material about what I've been watching/playing/listening to, etc. This lead to the Not That You Asked series of "zines." However, I am not good at social media (I refuse to be) and this materials never found an audience. The process of making each zine each month was hell on my free time and I was never really proud of any of the material within (and yet it's still all available on this website!) and I was mostly doing it out of a misplaced sense of obligation. It's so important to build your brand, after all (is it?).

So, I moved on to a different project, something a little more fun, and lower stakes: a longer-form comic that would be drawn a page a day with no real clear end goal in mind. This is what led to the now-abandoned "Dude Rugs" project. Not only was there no audience, but even the small potential audience of people that I know didn't engage with it at all, and after a solid month or so of daily posting and nothing to show for it (not even hate mail), I lost my passion for this medium for a long time, and I decided to focus on writing feature-length screenplays.

Why screenplays? It was a lot easier to type on a keyboard at the end of an 8-hour shift at Target than it was to set up either my paper pads or digital tablet to make coherent comic pages. This is while I was still working at Target, and the piss-poor working conditions somehow deteriorated: causing a lot of mental and physical exhaustion and anguish on my part. I was also still living with my parents and felt defeated by not having a real, private space of my own. I was in a very bad place, and I think my writing reflected that. The scripts that I produced during that time all had the kernel of a good idea in them somewhere, but they were also all confused, angry, dark, and disturbing. There are very few artists and writers who can accurately portray their miserable living conditions while still going through them (take a look at the work of Noah Van Sciver in early BLAMMO to later works to see what I mean).

And so came October of 2019. I needed to escape in some way or another. My initial idea was to take an extended leave of absence from Target to head out to Los Angeles to try and find some better creative prospects. I was immediately faced with the reality that I would have to permanently leave my job at Target to pursue this for a decent amount of time. It took some searching, but I decided to leave Target. I knew it would only lead to deteriorating health if I were to stick around somewhere I was miserable.

Los Angeles proved to be fruitless, but I decided to take some extra time to head up the coast, eventually ending up in Portland, OR. While I set out to try and field a career in screenwriting (something I still wouldn't mind), what I really found was comics.

It had been a very long time, but I remembered that I loved comics. Not only that, I realized that they were the most important thing in the entire world. That I wanted to dedicate my life to comics and that I needed to do it in a way that made sense for me. Why was I ever making those shitty ballpoint pen autobio comics; I never wanted to make that stuff! No, what I realized was that I really wanted to do was create a graphic novel (a term that I strongly dislike, but whatcha gonna do?).

And after returning to Colorado, weathering the first tumultuous year of the pandemic and finding a job that I actually enjoy somewhat, I've been at work.

But I wanted to make sure that anyone who wanted to knew what was happening. So many artists —cartoonists especially— disappear without so much as a trace. This is an industry that destroys people, but I wanted to world, maybe just the void know, I'm still here.

I'm not done yet.